Personal data is being used as currency. Meanwhile, it’s not necessarily private. Even when you ask it to be.

aNewDomain.net — Is personal and consumer data emerging as an alternative payment system? It is clear our personal data is worth a lot. It is almost like currency, especially now that services cut prices but require those personal stats. You pay less dollars in exchange for the details of your life. Think Freemium or “Credit Card Info Required.” Sign up, it’s free, sort of. The old currency. The new one is your data! Photo credit: aNewDomain.net

You may have decided, somewhere deep within, that this tradeoff is a bargain. The easy life of a savvy consumer, for the citizen with rights to complete privacy. If you have decided this, you should think again. As they say, be careful what you ask for. What we seem to have asked for is what we got: a democracy a la Big Brother that supports consumerism and commercial interests that are startlingly close to the public policies of the government.

We may have already made a choice — consumer first, informed citizen second. Is there a solution, a way out of this high-tension, “free”-information society? Or are we all actually the product of it?

Will Laws Make a Difference?

Some think that legal solutions will resolve the tension between digital/data capitalism and democracy. But, as Evegny Morozov recently pointed out in Financial Times:

But what good are these steps to counter the much more disturbing trend whereby our personal information – rather than money – becomes the chief way in which we pay for services – and soon, perhaps, everyday objects – that we use? No laws and tools will protect citizens who, inspired by the empowerment fairy tales of Silicon Valley, are rushing to become data entrepreneurs, always on the lookout for new, quicker, more profitable ways to monetize their own data – be it information about their shopping or copies of their genome. These citizens want tools for disclosing their data, not guarding it.”

I found this Tweet on FT to be an interesting perspective:

Silicon Valley has become a viper’s den of latter day robber barons, or highway men with means. And every government on the planet is afraid of them. I don’t blame the robber barons. They have a go, as they always do. I blame the spineless legislators and regulators for letting them get away with it.” Good European | December 27 2:42 p.m. |

As Joe Nocera wrote in NYT ” It is Lanier’s radical idea that people should get paid whenever their information is used. He envisions a different kind of digital economy, in which creators of content — whether a blog post or a Facebook photograph — would receive micropayments whenever that content was used. A digital economy that appears to give things away for free — in return for being able to invade the privacy of its customers for commercial gain — isn’t free at all, he argues. see http://www.nytimes.com/2014/01/07/opinion/nocera-will-digital-networks-ruin-us.html?hp&rref=opinion&_r=0

How can we, as citizens, rebuild trust as we live through a transformative moment in the way capitalism works? A moment that Snowden made us so publicly aware of?

If the Titans of Silicon Valley want to rebuild the trust needed, they must acknowledge that consumers have citizens’ rights. Data protection is one of those rights. If our data is used confidentially, it must be kept that way. Another right? Encryption. Our messages should not be read or our personal details decoded.

Over the past week, users of two popular Internet messaging companies, Snapchat and Skype, found out their accounts were compromised. Snapchat’s 4.6 million users’ user names and cell phone numbers were posted online. A hacker group posted messages to Skype’s official blog and social media accounts. These examples of security and privacy issues are just the latest for a long list of tech companies that fail to provide adequate protection of their users’ personal data.

Do companies that offer free services have an obligation to protect our communications? Yes, absolutely. The EFF released a report on the actions of the NSA’s MUSCULAR Program.

The National Security Agency’s MUSCULAR program, which tapped into the fiber-optic lines connecting the data centers of Internet giants like Google and Yahoo, exposed the tremendous vulnerabilities companies can face when up against as powerful an agency as the NSA. Bypassing the companies’ legal departments, the program grabbed extralegal access to your communications, without even the courtesy of an order from the secret rubber-stamp FISA court.”

It included an EFF survey, which is in full below, that details which companies provide legitimate encryption security. Our citizen rights are being misplaced by consumer needs and the idea of privacy. Get informed, get safe.

For aNewDomain.net, I’m David Michaelis. See the infographic below. 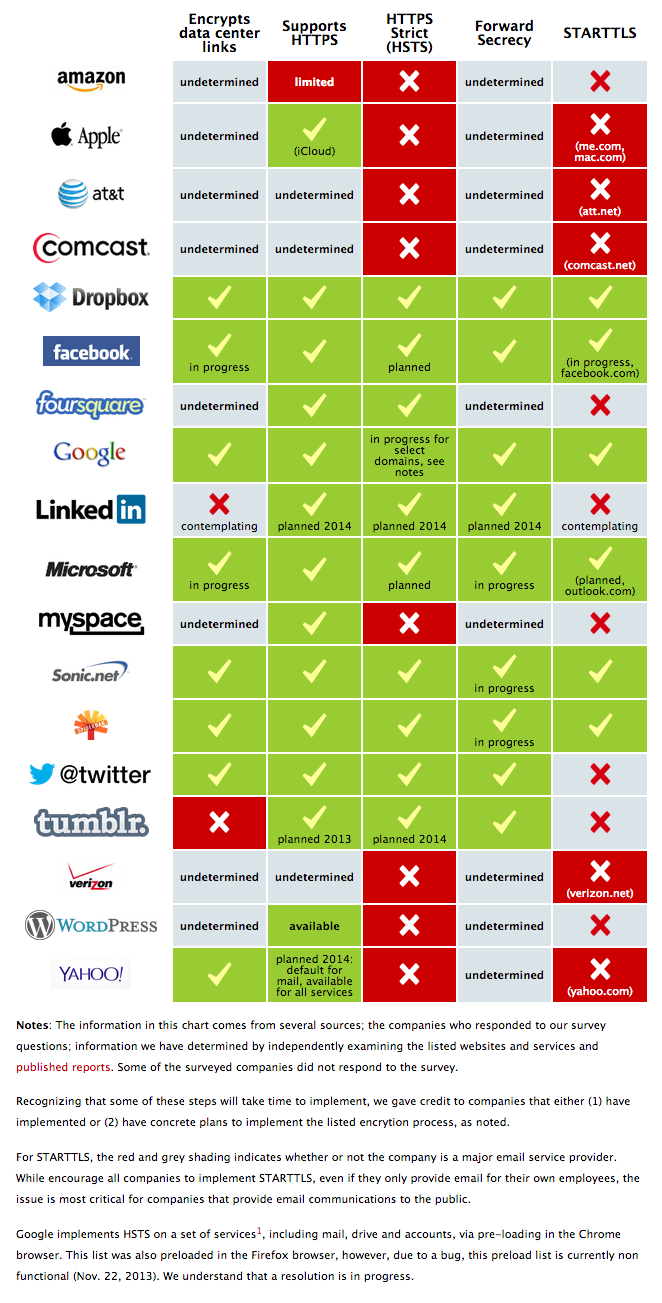