The Obamacare site and the NSA PRISM project each collect a lot of data about you. David Michaelis asks why no one is connecting the data privacy dots.

aNewDomain.net — The Obamacare healthcare.gov site and the NSA PRISM project each collect a lot of data about you, points out our David Michaelis. The two differ in motivation and methods, but the risks to you as a citizen and a patient are potentially the same. Their respective non-transparency as government organs are not that far apart. Here’s analysis from David Michaelis — and an infographic on healthcare privacy as it stands today.

During President Obama’s meeting with top Silicon Valley execs, it was clear the government and high tech biz had two different sets of priorities.

The White House spent a lot of time asking for advice from the tech companies about its roll out of the Obamacare healthcare site. Tech companies, on the other hand, had plenty of questions about NSA surveillance. In a statement from the group of Silicon Valley reps, tech execs said:

We appreciated the opportunity to share directly with the president our principles on government surveillance that we released last week and we urge him to move aggressively on reform.”

For more on their points, see this article on Silicon Valley CEOs and their current position on NSA surveillance.

Meanwhile, Back at the Summit … 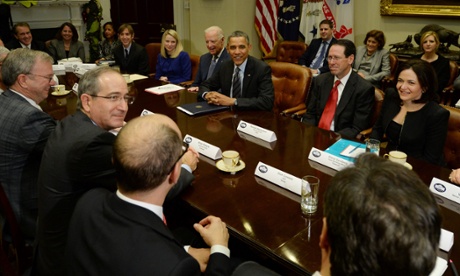 Though both sides described the summit and goings on differently — this is a textbook study on spin, hypocrisy and denial — both managed to avoid the main issue Americans and world citizens yearn to know most about: the right not to be tracked and exposed, as consumers and citizens.

The gap between the two versions can be explained by the huge divide of looking at surveillance and privacy and protection of data. The Silicon titans are worried about losing the trust of consumers, while Obama appears to be more worried about Obamacare and the public’s perception of it. Neither side managed to connect the dots between data privacy in terms of healthcare, as managed by the U.S., and data privacy as the NSA PRISM and other government programs fracture it. It’s all part of the same challenge.

David Kennedy, founder and principal security consultant at TrustedSec,warned that the Healthcare.gov site is in no way secure.

… It’s hard to bolt on security after a site is developed and … no security was ever built into the Obamacare site … There are a number of security concerns already with the website, and that’s without even actually hacking the site. That’s just a purely passive analysis of [it]. We found a number of critical exposures that were around sensitive information, the ability to hack into the site, things like that. We reported those issues and none of those appear to have been addressed at all.”

See more at this excellent ComputerWorld analysis of the topic.

Most Americans don’t realize it, but healthcare breaches are a part of everyday life in the USA today. Check out the infographic below.
http://www.welivesecurity.com