aNewDomain.net — A staggering 1.8 million Yahoo! webcam users have had their images intercepted and recorded. This by a UK-based operation coordinated with the NSA called Optic Nerve, according to the Snowden docs. Read more here.

British intelligence GCHQ was very disturbed by the amount of naked images exhibited on the cams. The Guardian supplied the original doc below. 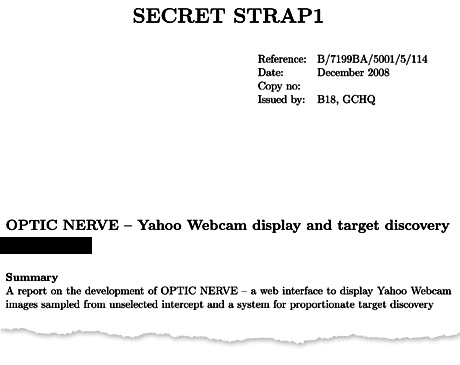 Yahoo! reacted furiously to the webcam interception when approached by The Guardian. The company denied any prior knowledge of the program, accusing the agencies of “a whole new level of violation of our users’ privacy.“

What to do with the NSA has become a dilemma for the president. The four choices Obama has been presented with, according to multiple news sources, were leaked to the DC press this week:

If you think that you have any idea what is happening with the NSA surveillance you are living in La-La-Land. Even if Obama makes a clear choice among the first 3 options, the choice will not be accountable or transparent. It is all about spin and make believe. So take what the president promises with a grain of salt and watch what really happens.

Reacting to The Guardian’s revelation on Thursday that UK surveillance agency GCHQ swept up millions of Yahoo! users’ webcam chats, senators Ron Wyden, Mark Udall and Martin Heinrich said in a joint statement that “any involvement of US agencies in the alleged activities reported today will need to be closely scrutinized.”

We are not the only ones who doubt these choices. Senators are also doubting the options as reported by The Guardian.

Congressman Jim Sensenbrenner, a Wisconsin Republican who authored the USA Freedom Act, a bill to end bulk domestic surveillance, said he was ‘unwavering’ in his stance after hearing of the new options the administration is considering.

‘While I am willing to sit down with President Obama and my colleagues in Congress to negotiate certain aspects of the bill, my stance to end bulk collection of innocent Americans’ data is unwavering,’ Sensenbrenner told The Guardian on Wednesday. ‘Bulk collection has never been authorized by Congress and I intend to stop this blatant abuse of the law.’

Senator Ron Wyden, another critic of bulk surveillance, told The Guardian: ‘Ending ineffective collection that violates constitutional protections, adds little or no unique value, and could be replaced by less intrusive methods makes more sense than trying to continue it.’ “

Read the full article from The Guardian.

NSA wants to see you, but not naked, please.