aNewDomain — Last month a delegation from the U.S. government traveled to Cuba to talk about U.S. involvement in Internet and telecommunications in the country. The overall impression: both sides are moving slowly.

There were no official releases of the meetings that occurred, but plenty of off-the-record quotes have been supplied by the press, taken from U.S. attendees. Here are a few:

It seems clear that the U.S. believes Internet infrastructure and service providers are capable and authorized to do business in Cuba. The real question is what will Cuba allow — the ball is in its court. What can the country afford and what does it want for its Internet capabilities?

My Own Off-The-Record Talks 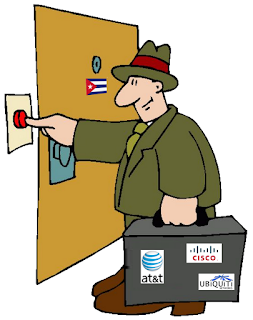 The lack of information on these talks begged a number of questions, so I decided to ask a few. I spoke to people with knowledge of the meeting and can fill in a few of the gaps.

This reminded me of the old days of Cuban Internet, in which technical folk and academics met easily with a host of ministries, like Public Health, Higher Education and Science Technology, and the Environment. The Internet was the main topic then, and discussed openly, but today business and politics is the primary matter of discourse.

The times have certainly changed, but the discussions during this talk emphasized domestic infrastructure rather than undersea cables. I asked whether the Cubans had shared specific information on their current domestic infrastructure. They had not, but the folks I spoke with have gathered a rough picture over time. They think there’s a fiber backbone connecting each province (including Isla de la Juventud?) with more fiber in Havana and the tourist areas. There’s a mix of equipment from China, France and Vietnam, which means the U.S. has competitors.

I asked about the undersea cable being installed between Florida and Guantanamo and was told that it was not mentioned and that Guantanamo is for future discussion — perhaps in five years.

Because the delegation met with ETECSA and ministries in the government, I asked about the structure of ETECSA and its relationship to the Ministry of Communication. I was assured that although ETECSA is owned by various organizations, the company is definitely a government-run operation with revenue of about $1 billion per year.

I also asked about possible legal roadblocks — civil damage claims by Americans and Cubans. They said that there’s precedent for settling such claims and some funds will change hands, but this will not be a deal-killer. Cuba being taken off the list of state sponsors of terrorism will also ease these problems.

I asked whether they had discussed copyright violations, for example, in the weekly distributions of software, entertainment, news and other content on flash drives. This was not discussed, but it too will be the subject of negotiation.

I don’t know how these things go, but I imagine the government representatives who traveled to Cuba will now meet with and inform U.S. businesses that are interested in offering things like satellite connectivity, terrestrial wireless equipment, fiber, networking equipment, service, and other services. This will give U.S. companies some insight into what to expect in terms of regulation and demand. Presumably Cuban officials are also in touch with companies like Google, IDT and Netflix, which have begun investigating offering services on their own.

From my impression and analysis, the emphasis of these talks focused on Cuba as a customer, rather than a vendor, and I hope future talks and policy changes facilitate bi-directional business.

One thing is for sure — these talks were only a small first step. U.S. companies are interested in Cuba, but will move cautiously, realizing that Cuba is poor, has only 11 million people and, more importantly, the country remains a dictatorship with over 50 years of a bureaucratic, socialist economy. That will change, but not overnight.

If I were running the show in Cuba, I would also go slowly — adopting some short-term measures, while planning for the long term. I would talk more with equipment vendors than service providers and look to the example of Stockholm, instead of Miami.

Above all, though, I would be thinking about the role of ETECSA. After all, the Cuban Internet should serve the people, not increase government and ETECSA revenue.