Check out this gallery tour of Microsoft’s upcoming Windows 8 — is it for you?

Windows 8 will be out before you know it. Microsoft will start selling it to the masses on October 26, 2012, but I’ve been testing it out for months now.

Here’s a tour of some of the new Windows 8 features and functions you can expect. Check it out. Let’s start at the beginning — at the first screen I see on booting up Windows 8.

Lock Screen
Tthe first thing you’ll see when you log in to Windows 8 is its customizable Lock Screen. Add the time, weather, recent email, calendar events and your own photos for the back drop. To get past it, just click the screen, hit Enter on your keyboard or tap the screen on touch enabled devices.

There is plenty of time to configure that stuff later – return to it if you like or do it on the spot.

Once you’re past the lock screen, you’ll see the data for your new Windows 8 tiles the system sets up for time, date, weather, stocks you follow and other trackable data constantly updating. Distracting. But it also shows how many messages I have waiting in Windows Mail. 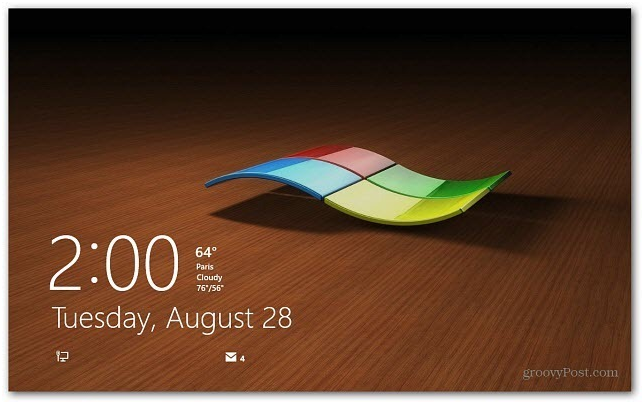 Customize the screen now and you won’t have to backtrack to do it later if so many tiles bother you. Do that in Windows Settings, which is easy to find in the user interface. I’ll explain how below in the wrap-up.

If you’re a PC user or plan on using a Windows Phone 7- or 8-based smartphone as they come out from Nokia and others this holiday season, you definitely want to get a hang of it. The tiled interface is natural on a phone but feels awkward at first on full-fledged PC. But they’re useful – and getting used to them was not as hard as a lot of critics have you believe.

Live tiles display information as they update, live. Watch the weather, stock ticker or other things you keep track of in Live Tiles change without ever needing to refresh it yourself. The tiles are pre-configured with content it thinks you’ll want – i.e., news, weather – but it’s possible to customize Live Tiles content, size, move them around or group them together in settings. I am impressed, so far, with the UI’s flexibility in this regard. And relieved I can change these settings. Some people don’t care much about the weather.

Xbox Music and Video
Currently the new Xbox Music service from Microsoft is in limbo as its being revamped from its roots at Microsoft’s Zune Music, the system it replaces. The Windows 8 Xbox Music app has basic controls and functionality – a common denominator of features you’d find in any music player available from Apple, Google or Amazon.

You’re able to create playlists, add your own music and purchase tunes from the Xbox Music Store. With an Xbox Music Pass – your Zune Music Pass will work if you’re one of those few customers who sport one — you’re able to stream unlimited tracks from its store for $9.99 per month with a 14 day free trial.

Before you sign up for real, do check out other music players to see if they fit your music collection better in terms of size and special deals available from record companies. 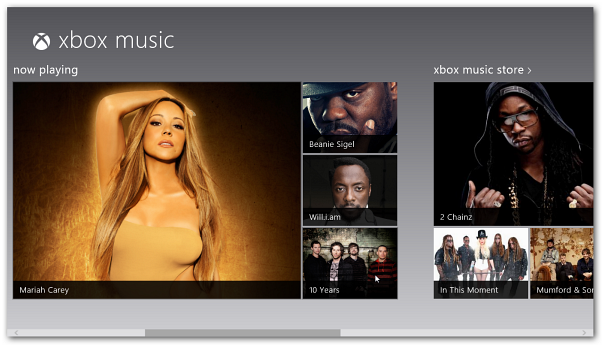 Windows 8 lets you watch available Xbox Movies, too. A cool feature for all the Xbox users out there. With this, Microsoft is of course playing catch up. That’s fine. Everyone’s doing it. Amazon just announced its Amazon Kindle Fire HD, aka Hollywood, a device designed for movie viewing. Now Windows 8 and mobile Windows Phone 8 users will have their own default video player, too.

This is where you manage your collection, browse the Xbox Movie store for movies, TV shows, specials and sitcoms. I am warming up to the system, but I’m still a pretty hardcore Netflix user. It will be intriguing to see how many customers stick with the built-in system here just out of convenience – or whether they remain loyal to their current streaming IP systems. 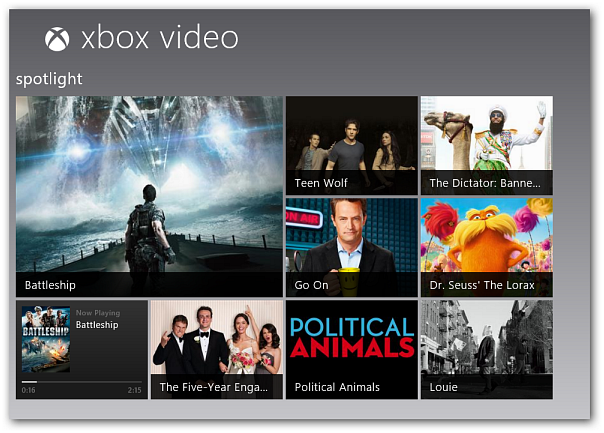 With the Windows 8 Xbox SmartGlass app you’re able to stream music, videos and games via Wi-Fi to your Xbox 360, too. Nice.

Now, once the Windows Surface tablet is released, Windows 8 will offer an AirPlay-like experience that Apple iOS users already use to link their iPhones and iPads with Apple TV, according to MS reps we interviewed.  This new feature is worth watching and waiting for – but only if you’re planning to move from your Apple iOS tablet or mobile device to get this functionality.

Windows 8 has a new user interface for the latest version of MS Internet Explorer version 10, too. It inherits the tiled look of the system – making for a completely different-looking Internet Explorer search experience –and that takes some getting used to. I

It is faster, Microsoft claims, and we’ll test that claim out for you when the OS is out for real in a few weeks. Certainly my version is snappier than earlier IE versions I run. At any rate, check out its completely new look, below. I like it. 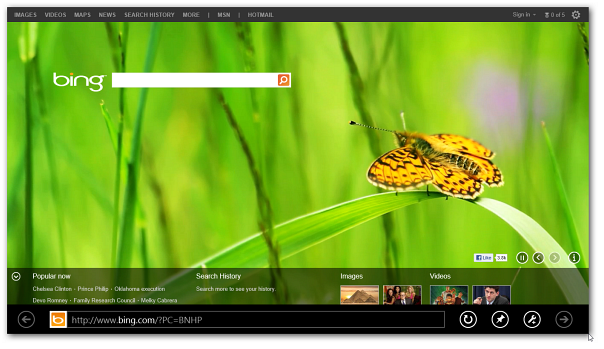 Windows 8 Desktop
The Windows 8 Desktop finally lets you get rid of the rounded corners of the Windows 8 screen in favor of the sharper ones testers have clamored for in Microsoft’s public alpha and betas.
You’ll also want to customize the opaque borders of the windows to look sharper. That’s easy to do in Personalization settings, the same area in Windows 8 where you customize tiles and other system settings.
To get there the quick way – just to make the borders sharper — quickly hover the mouse in the lower left corner of the screen to find and access Windows 8 apps that are running. Hit Ctrl + C on the keyboard to bring up the Charms bar. That bar will pop up, including Settings, Search and a way to maneuver back to the initial start screen.

Missing the Start menu? Watch this space tomorrow for a freeware review of a package that will return that familiar icon to your screen

If you’re unimpressed so far, you’ve got to see the new UI of Windows 8 operating on any touch screen slate device or tablet PC. Here Windows 8 really shines. That’s because its tiled interface and multitouch screen ability work so well in that environment. It works more naturally and fluidly than the same software on a regular PC or laptop.

To bring up the Charms bar on a mobile device running this user interface and tweak the interface and other settings, simply swipe from the left of the screen to the right or vice versa. 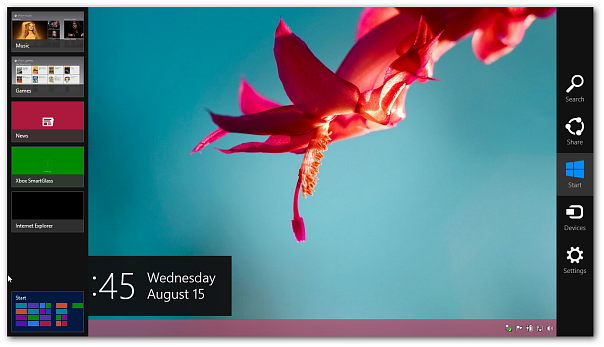 Windows Snap. This lets you run the new Windows 8 UI apps and the desktop side by side. This is nice because we don’t expect there to be a ton of Windows 8 native apps right away, but the ability to watch them side-by-side doesn’t relegate your new apps or your old apps to the techno ghetto.

Here’s an example of how my screen uses Snap to run the Windows 8 native version of its SkyDrive cloud storage service at left  and the Windows 8 desktop in “legacy” or old-fashioned mode at right, side by side. 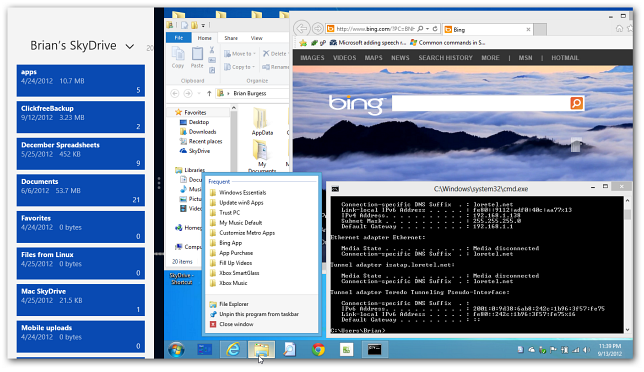 Speaking of the Snap feature, I find it more intuitive if you’re snapping two apps that are both Windows 8 native – that is, if they’re written especially for the new tiled UI.  Here, I have the MS Bing app and Internet Explorer 10 running side by side. This combination in particular is cool because it lets me search in two apps at first. Bing is dramatically faster in this release – and Internet Explorer 10 is zippier, too.

Finally, Windows SkyDrive is built into the new OS. This would big news when Microsoft first told the world this right before this year’s Mobile World Congress smartphone convention in Barcelona. Now MS says every new user will get a free Microsoft Account with 7GB of storage space in SkyDrive. That’s not a lot of space, though. But it’s free, secure and a start in the right direction.

I’m betting, given previous experience, that Microsoft will increase that limit to incentivize folks to get off Windows 7 and onto 8. Anyone with a full Dropbox knows what a pain it is to nickel and dime your way to more remote cloud storage.

And if you don’t know, be forewarned.

Takeaway: This gallery of Windows 8 features is my analysis of what you need to see before you buy or even try and buy. So far, Windows 8 has been working great for me and the leaps in training everyone is complaining about – getting used to the new UI being the top complain  – just aren’t fazing me. Maybe you’ll feel differently.

Also, bear in mind I’m a hard core Windows 7 user. After using that stable OS for so long, it will be hard for a lot of folks to switch. My advice: Rather than upgrade, wait to get your new OS the next time you buy a computer.

That’s just good advice for any operating system upgrade – if you want it easily and seamlessly. More adventurous folk should just partition an area on a hard disk and start trying it out now. Trial developer and beta versions are available.