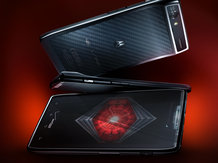 But we want it NOW!

It seems the UK will have to wait a little longer to get its hands on the much-vaunted Motorola Razr, with the device reportedly being delayed.

To be fair to Moto, the company never specifically outed a firm Razr UK release date, but according to online retailer Clove, the launch has been moved back a week.

"Unfortunately we have just heard that the RAZR release will be delayed until next week.

"No reason given for the delay at the moment, we did think the 1 [November] and then the 2 [November] were pretty solid, especially as the 2nd was reconfirmed last Friday."

Go on, buy one and shoot it

The Motorola Razr emerged only last month, but is coming with a glut of top-end specs, including a 7.1mm depth, a 4.3-inch Super AMOLED screen and the now de rigeur 1.2GHz dual core processor.

Oh, and did we mention it's covered in Kevlar to make it bullet-proof (well, sort of)?

It's also expected to be a little cheaper than some of the other top-end smartphones on the market, with an expected Motorola Razr UK price of £450 making it slightly easier on the wallet for some.

We're looking forward to bringing you our full Motorola Razr review, and we're expecting samples to arrive on our desks any day now… so stay classy, TechRadar fans.