The robotic spacecraft Cassini burned up in Saturn’s atmosphere today, but man, did it ever take some awesome photos going down. Check them out here. [gallery]

— It wasn’t supposed to end this way.

When Cassini inevitably ran out of fuel, as it did this month, scientists thought they’d just sent Cassini over to a nice, retiring orbit around Jupiter or Uranus.

That plan changed back in April, when they chose instead to let Cassini crash and burn in the atmosphere of Saturn. And in the early hours of Sept. 15, 2017, that’s exactly what happened. As millions followed its death march online and on NASA TV, the robotic spacecraft NASA, the European Space Agency and the Italian Space Agency launched in 1997 made a final, fiery plunge through the ringed planet’s atmosphere.

It burned up, of course, but not before it scored some closer than ever photos of those rings and the planet itself.

That, after all, was exactly the point. In its impact course with Saturn, which NASA set in motion back in April, Cassini got its closest ever look at Saturn’s rings and of the planet itself.

It was a fitting ending to a spectacular mission, which led to such high-profile discoveries as the presence of a liquid methane sea on Saturn moon Titan and of active geysers on Enceladus, another of its 61 moons. But it wasn’t just the eighth planet and its storied rings that Cassini shed light on.

“Perhaps most importantly, [Cassini] illuminated processes and forces that shaped the early days of the solar system—forces that have made our planet what it is. It’s given us new candidates for where life might exist, and what it might look like if we find it,” a NASA spokesperson said in a statement today.

We can’t wait to see where the Cassini data leads. But for now, why not take a long, leisurely look at some of the most spectacular images Cassini captured during its 22 dives along its collision course? Here are some of our favorites among Cassini’s final photos.

Let’s start with this image, which was created by data from Cassini’s visual and infrared mapping spectrometers. It captures the point where Cassini entered Saturn’s atmosphere on its final day, Sept. 15, 2017. Saturn Before the Plunge

Cassini snapped this image of Saturn’s northern hemisphere on Sept. 13, 2017, right before it began its plunge through its atmosphere. It is lit by visible red light, thanks to Cassini’s wide-angle camera. It was shot at a distance of 684,000 miles (1.1 million kilometers) from Saturn. This monochrome view of Saturn, which captures its night side, is the last image Cassini took on its Sept. 15 2017 plunge toward the planet’s surface. The image is lit solely by reflected light from the planet rings. The image also reveals where Cassini would enter the planet’s atmosphere for its death dive, hours later. Taken by Cassini spacecraft on Sept. 13, 2017, this was one of the last images Cassini sent to Earth. It’s a view of Saturn’s A ring. The lone “propeller,” says NASA, was created by one of the countless tiny moons (moonlets) that are embedded in the rings. On its final tour of the Saturnian system, Cassini nabbed this view of Titan, Saturn’s big moon. 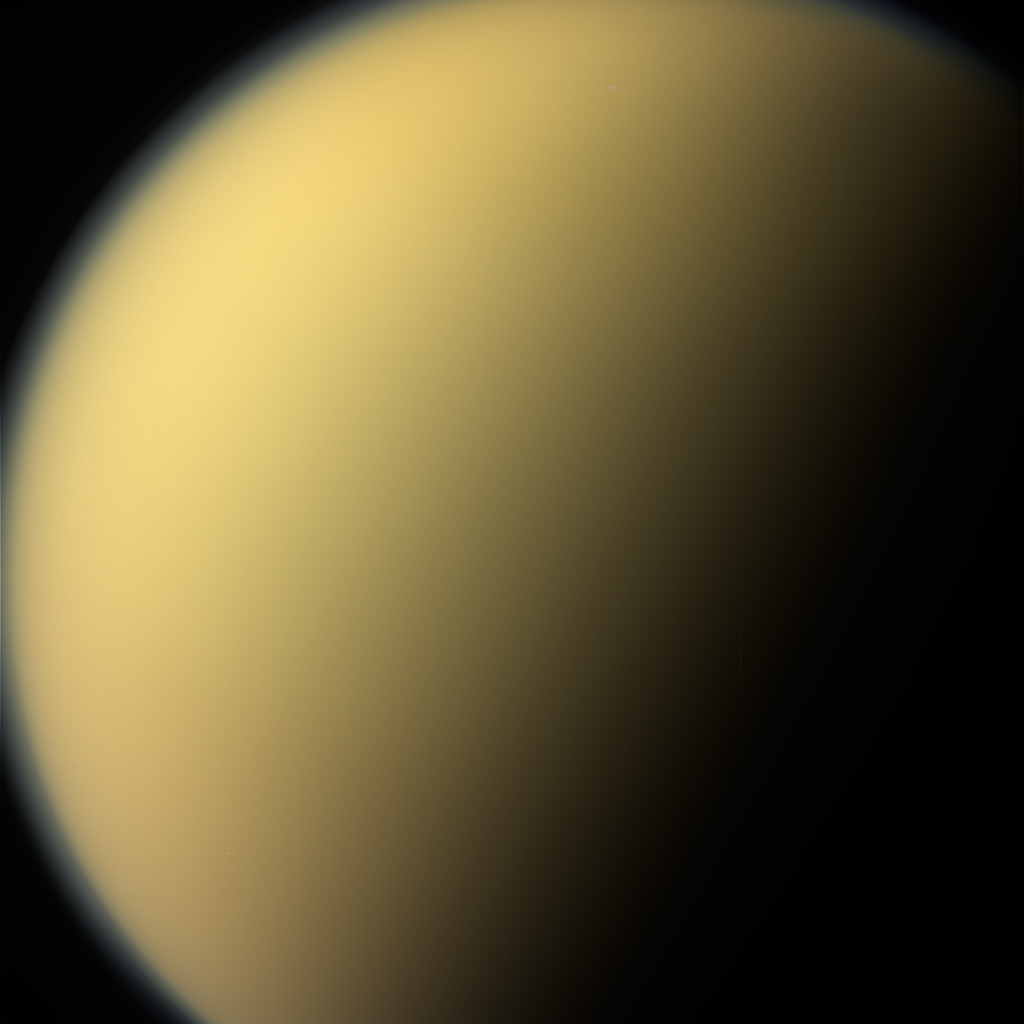 This is one of the final long distance shots Cassini grabbed of Saturn and its main rings. A View of Enceladus

Cassini has been monitoring little Enceladus for several years. The tiny moon, which is just 313 miles across, features plumes that scientists now know are from active geysers. What a beauty shot. Here’s a wonderful shot Cassini captured of its icy moon, Tethys. It’s illuminated by Saturnshine — that is, sunlight that the planet reflects. And look at those icy rings. Clouds on Saturn look like someone added them with a cosmic paintbrush in this colorized Cassini image. The effect is due to the way fluids interact in Saturn’s atmosphere, say scientists. Double Titan
Here are two views of Saturn’s moon Titan, as captured by Cassini in its final days aloft. Titan Skies and Clouds of Methane

This image, which Cassini shot not long after it was sent on its impact course, shows the feathery methane clouds of Titan. Thanks to Cassini, we now know that Titan’s surface is covered by a liquid sea of methane, a discovery scientists say justifies future exploration — possibly by submarine.

The Final Shot
This is the closest ever photograph depicting features in Saturn’s atmosphere. It wouldn’t have been possible without Cassini’s Grand Finale dive, which commenced April 26, 2017 and ended today, Sept. 15, 2017. If you liked these photos, be sure to stop by NASA/JPL’s collection of all the thousands of shots Cassini took of Saturn since it first arrived in its orbit.

It’s funny. When Cassini first left planet Earth on Oct. 15, 2017, Bill Clinton was the president of the United States, Tamagochis were the rage among middle schoolers and America Online shocked the business world with a new $19.95 a month pricing plan that gave its subscribers unlimited access to its services and to the Internet.

Looking back now, the tech at the time seems so crude, doesn’t it?

But Cassini’s tech held out. It was built to do exactly what it did — and what it did, it did spectacularly.

So rest in peace — and thanks, Cassini.
You rocked. You really did.

p.s. Can’t get enough of Cassini? We get it. Check out the following talk and presentation on Cassini at Caltech’s Jet Propulsion Laboratories. It’s the money.

Cover image: One of Cassini’s last shots of Saturn’s main rings at a distance: JPL/Caltech 2017.